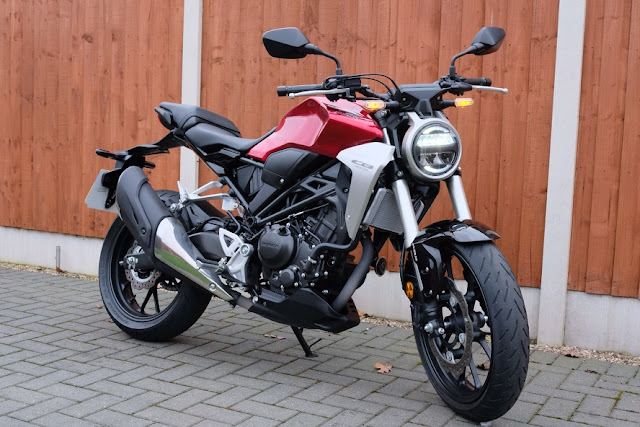 Having ridden about 100 miles so far, I thought I’d give you a first impressions review.
As you walk up to the bike, it’s obvious that it shares it’s DNA with the other three bikes (four if you include the non UK,CB250R) in Honda’s “Neo Sports Café “ line up. It’s all rather angular from it’s characteristic two part LED headlight to it’s chiselled pillion seat.

The combined cat (and everything else) in the rear exhaust section means this is a huge component. Honda have done their best to make it a pleasant looking thing though. Let’s not talk about the tail end for now which some have described as a “selfie stick” The previous (MY18) model’s Red and Gloss Black have been joined this year by a rather nice bright silver (gunmetal rad shrouds) and I’m told a very nice matt blue. The latter being set off rather nicely by having bronze wheels.

It looks a tall bike to me from certain angles, certainly compared to the Grom. Slinging a leg over it the first thing you notice is the view forward – like many modern bikes you can’t see the front mudguard at all by virtue of the sharp steering angle, the world disappears beyond the top edge of the dash. Seating position is upright with a slight reach to the bars for me, legs are slightly behind giving it the sportier side of upright. Talking of sharp, the corners of the angled seat dig into your thighs a bit when I have both feet down (balls of my feet in my case), but these are unnoticed once underway.

The digital dash is of the white -on- black LCD variety (which I preferred on the previous NC over it’s multi-colour TFT replacement). It shows most of the info you need e.g. MPH, Bar graph Tacho, time, mpg, engine temp etc. Nice to see a fuel gauge but it lacks a gear position indicator which I feel is a bit penny-pinching given the bike’s intended market as an A2 compliant step-up bike.

The handlebar controls are in the usual and correct place, except for the big grey horn button (which we have become used to by now). Clutch action is light and the bike starts easily and emits a pleasant thrum. Clutch bite is very early, in fact I checked the free play with the book and it is correct at 10-20mm. First gear is short as you’d imagine and second gear starts would be easily accomplished if it were easier to access 2nd from neutral (it’s not). That said, the gearbox is a joy with all changes slick and positive up and down the box (compared to the Tracer 700 which had a very notchy downward shift). Neutral too, is easy to find unlike my previous NC750S which was really difficult with a hot engine due to clutch drag which I never successfully adjusted out.

Throttle response is excellent – fuelling almost perfect. Acceleration is brisk for such a small engine, but it mine feels a little tight still – probably due to the low miles. Nevertheless, thanks to the lovely gearbox you’re soon in top and looking for 7th… In 6th Gear rpm’s equal mph/10 so it’s easy to see that you are indeed in top. Fourth gear is the best gear in town allowing brisk pace and easy speed management with the surprisingly torquey little single not being fully linear – instead possessing a very nice little power band at 6500rpm which makes it feel a bit naughty to ride.

Brakes? Excellent – obviously helped by the low weight of the new frame in the CBR with good feel and brilliantly progressive too. The front will literally stop you on a dime, rear is both useful and affective but engine braking as you might imagine, rewards good planning and the brakes are superfluous most of the time when riding “normally” only being necessary when pushing on through the twisties.

Speaking of twisties, again due to it’s light weight, counter steering is largely redundant too as the little 300 can be thrown into bends with a mere shifting of weight or position in the saddle. The suspension has a little bit of initial sag front and rear with weight distribution roughly 50/50. The OEM Dunlop Sportmax tyres are hard – especially in these low temperatures and slow to warm up too. I had no confidence issues in the dry and soon had the chicken strips reduced in width, but lack of feedback might cause a bit of worry in the wet – all pretty standard by my experience of Dunlop rubber though. The two channel ABS is supposed to be IMU based with dynamic linking between front and rear - but I couldn’t invoke the anti-dive effect even though I had the front wheel gently skipping. Perhaps the MY18 version I have lacks this, I’ll have to check.

A gentle bimble today from Derby to Alfreton on the back roads was most enjoyable. Average fuel consumption being 90.2 mpg. This came down to 82 mpg during my quick return blast down the A38. For the record - on the “private” stretch of this particular road, maximum speed topped out at almost exactly 90mph at 9000 rpm with 1500 rpm left before the red line. The white (bright) change-up LED was set to 6k rpm when I first got the bike and was winking at me quite a lot so I shifted it to 9k now it’s time to stretch out the little motor a little.

Talking of engine speed, it has taken me a little while to get used to the revvy nature of this little single. Having had bigger bikes of late, with almost ornamental gears getting a small bike with which you have to actually use the gearbox is a revelation! I’m already getting back that feeling which got me into bikes over forty years ago. The little 300 is a joy to ride. It’s great to have a bike which rewards good technique, a bike you can literally throw a leg over and throw into bends. It’s been a long time since the simple motion of a gear change can have the bike twitching in harmony like it’s a part of you rather than feeling like you’re an accessory to it.

As I approached Derby city limits (not really Nutbush) The motor has rewarded a little bit of appropriate thrash by loosening up quite a bit. That lovely forth gear zoom is even more zoomy and as my confidence improves again it’s great to filter – just because I can and not because “you have to”. The Honda CB300R really is a little "Grown up Grom"

URDLAM Photography
A keen (amateur) photographer for many years, beginning in the early 1980's with a Practika MTL3 35mm film camera