My Journey Into Motorcycling

My late father Ernest "Ernie" Ball first introduced me to motorcycling. He had an old Honda 50 Cub which was on the back garden under a cover (for years it seemed). One day he pulled the cover off and with half a gallon of fresh Four Star it started up - second kick. Sporting an oversized adult open face helmet, I climbed on the back and held on. I was eight years old and hooked!

My first proper bike was a 1977 Suzuki AP50 (the other "Fizzie"). It made about 4bhp and it was my first commuter. Sent on a Yarn and Textiles college course by my employer Dobson's Fibres, my transport to and from Nottingham Trent Polytechnic was to be my "Ape 50". A test run was performed the Sunday before term and I started happily enough on the 14 mile journey. Not happy for long, the Ape seized solid about half way there and only swift clutch action saved me from skidding dangerously with a locked rear wheel. Richardson's Motorcycles sorted it under warranty with a new piston and rings.

Looking back now I'm sure that the "race" expansion chamber or "spanny box" caused it to run too leant. As I'd bought it like that though, upon it's return it sported a brand new proper Suzuki part in it's place. It was also far too quiet!.

I never did return to college, the textile industry held no interest for me, so I embarked upon a self-taught electronics study (then a self-funded formal qualification) which eventually landed me the career I have today. I did return to motorbikes though, and they've been in my blood ever since.

The following BMF link tells all. All about the teenage sports moped revolution of the late seventies which introduced thousands of British teenagers to motorcycling - the likes of which has not been repeated since.

The link below is to The Bike Specialist website which recently had a stunning example of the Suzuki AP50 for sale. 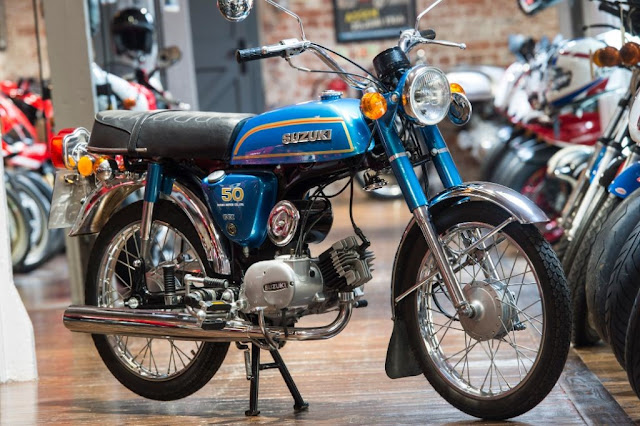 URDLAM Photography
A keen (amateur) photographer for many years, beginning in the early 1980's with a Practika MTL3 35mm film camera